Hi Robert, I apologize for sending you another question, but I also need your advice on how to introduce our newly adopted 1 year old Pomeranian to our cat (he’s the same Pomeranian I want to introduce to my 1 year old male GSD that I mentioned in my previous question). I’m in a crazy situation a GSD, Pomeranian & a cat they all live in separate spaces at home, & unfortunately my GSD was not properly socialized at an early age. You’re gonna kill me But I really trust your advice.

Hello Robert & Janet hope you are both well. My 6 month old malinois does great with most dogs and is fairly obedient when calm. However, she some times does get triggered and growls and lunges at some dogs when walking on leash or growls or snap back as a warning when she gets on her high drive side if I have toys on me ex. If I am holding a ball and another off leash dog approaches us. Would appreciate any advice on the best approach to correct this behavior.

This is part 2 on Mabel the great dane resource guarder. Your advice last time on the bed guarding seems to be making changes so thanks. The next thing is that Mabel will guard (mainly) my wife against my 12 and 8 year old daughters, and most the time with the 8 year old. I think my wife needs to work more with Mabel and establish that “she’s got it”. What steps would you recommend though as my 8 year old feels like she is the prisoner, just to keep her safe. Thanks.

The past week I have been dog sitting my friends golden retriever. Last night, my dog and the golden were lying down with me in my bed. The golden(8 months) starting to sit on my dog(2 years). My dog growled and then layer down somewhere else. He also will growl and show his teeth while play with other dogs. Is this normal dog behavior? Is there a way I can send a video?

My Husband came home from a short business trip the other day, was greeting the dogs as usual when suddenly our GSD became aggressive toward our Lab. She had never done this before, and in fact has been submissive toward him since we got her at 8 weeks. She is very well trained, socialized, even has her CGC. She’s in Dock diving, gets plenty of work and exercise. It, to me, felt like resource guarding. My husband was petting her and our Lab just walked past. What do we do?

We have a 15 week old GSD and have been shaping her platz behavior since 8weeks old. In the beginning she was doing a perfect Platz every time. Now she will only platz properly until she gets the treat and then she gets lazy and rolls to her side/ tucks her hip under. How do we get her to continue to stay in a proper platz and not tuck her hip under?

Hey Robert! Tuesday I asked the question about Loki (2 y/o mal) snapping at air when my girlfriend or I roll around in bed. The other day we were on the couch and I extended my foot toward him without thinking about it. He growled and as I went to remove my foot, he jumped off the couch and then nailed my foot before running away. Is it possible this is fear aggression? I get confused because he tries to hump/dominant behaviors but when he growls/snaps his body language seems more fearful?

I’ve been studying your puppy series and had a question about Siggy’s first video at 9 weeks old. All of our dogs have been Boxer rescues and we’ve never had a puppy before. I’m getting set to pick up our new Mal puppy next week! It looks like you guys were in a public place for the video and had a question about parvo. We have tons of open space at our home in Idaho. My question is was parvo a concern for Siggy during that video? How careful do I need to be in these open grassy spaces?

Hello Janet and Robert, I can’t believe after all the dogs we have had that I’m still having feeding issues. Maggie seems to finally like Farmers dog and Victor kibble (for now). Her breakfast bowl can sit untouched for hours. Around 5pm she will eat a huge bowl of both combined. If I don’t let her run and get excited afterwards would it be ok to only feed the 5pm meal? She is only 1 1/2yo and everything I read says at least two meals is best.

Recently kept a foster that has some human aggression. It does not appear to be fear of aggression. He is doing great otherwise, I manage him. Lots of obedience. Much thanks to you! He is not my first. The other mals have been human friendly and now have great homes. My question is would it help for him to learn a bite sport in order to learn not to bite unless told. I would have to travel a couple hours one way. But if this would help I’d be willing. Vet says he is about a year and a half. 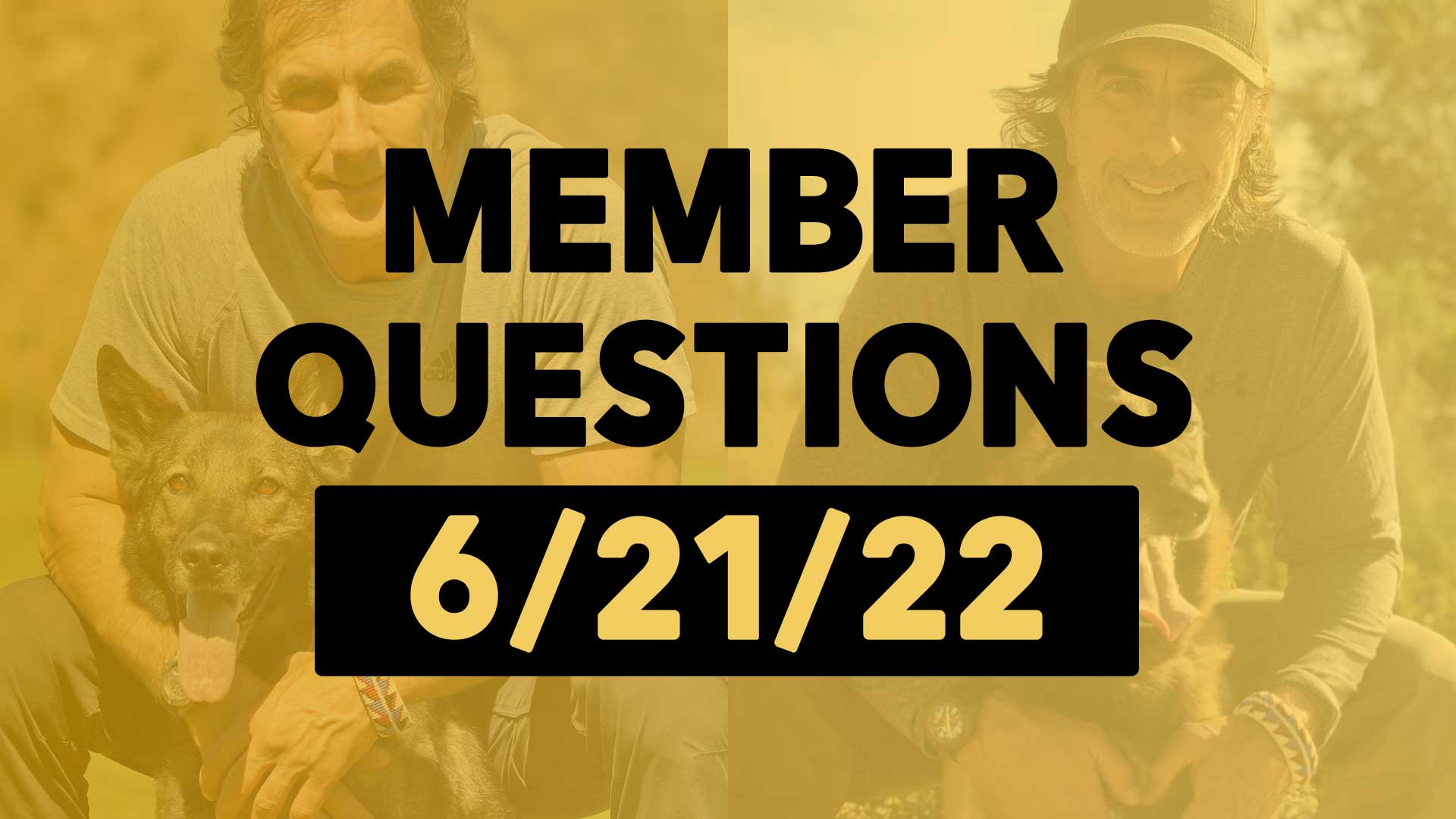