Naimbag Nga Aldaw Robert and Janet. I’m helping a friend with his 10mo old Mal. The pup has no training at all, no food or toy drive, darts all around while pulling the leash, and on the fat side. After 1 session I was able to have her turn around and come towards me with leash pops but doesn’t engage with the me or the owner. I’ve advised to lessen her food, or fast her for 24hrs. What would you advise we do? Dios Ti Ag Ngina.

I’ve had Ace since December. He’s awesome. He has one big problem. He was attacked by another dog 4 days before he came to me. Now, he is totally aggressive whenever a dog comes near. If it wasn’t for his ecollar I’d be in a pickle. What do you recommend? He’s a Dutch Shepherd. 3.5 yrs old.

I’ve noticed recently that my 1yo mal (5 months into e-collar training) is clearly remote wise. He doesn’t seem to be collar-wise, but put himself into a down or a sit whenever he sees the remote. I paid attention during training to be pretty random using the remote, switching hands and places but he got me on this one.

I don’t know how big of a problem it could be, but I would love your advices on how to fix it.

Thanks and God bless you

I have a 18 month doberman who is reactive to dogs when on leash on street. She is fine on a long line and in parks but pavements she lunges and barks. Please help!

Hi Robert, last week you mentioned over-corrections may lead to dogs working for pressure. I rarely used to correct my pup (now 5mo old Mal), but unsure if I’ve crossed into over-corrections recently. I pop the leash when he tries to hump/pester my 15yo Lab or during walks when he tries to eat duck droppings. I always precede with a NO, which he knows. My concern with using food is that he might think it’s a reward fort hose behaviors. Could you define over-corrections and how to identify it?

Hi Robert, I sent I. A question regarding this last month and wanted to follow up. My now 5 month Golden has exhibited resource guarding against my children a few more times. It’s always in his kennel and when he has something like a stuffed Kon or bone. If they approach too close to the kennel he growls. I think could be due to them sort of abruptly removing items he shouldn’t have from his mouth other times (socks, trash etc). Anything you suggest? Kids it happens with are 11, 9, 7.

My dog did something and I can’t tell why. We were in the yard when a runaway dog came by. My dog was on a leash and is trained not to pull, but when she saw the other dog she pulled so hard she broke the leash and beelined towards the dog. She didn’t bark, growl, or whine. I managed to grab her by the collar in time and drag her away but the entire time she was pulling so hard she was choking herself. I don’t understand what she wanted with the dog.She’s never done this before.Was it aggression.

Dear Mr. and Mrs. Cabral, Thank you for answering my questions. Is it important for my 8 month old Mal to learn to fetch? Currently, we throw the ball or other toy, and then she retrieves it, but puts it in her pile (away from the thrower). Then we have to walk to get the ball or toy out of her pile to throw it again for her. I think she’s teaching US to fetch! What are your thoughts, please? Thank you!

We’ve been letting my Lab (male) and Doberman foster (female) play more together. They’ve become best friends. However, last night I noticed scratches on my Lab’s front legs in areas where I’m able to see his skin. They play rough including biting each other but they take turns with being more submissive or chasing one another. Each of them comes back for more playtime and there haven’t been any hurt feelings. Occasionally I’ll tell them to settle down. Are the scratches concerning?

Hello Robert!! How do I get my 2 yr old German Shepherd to drop the ball? I have purchased two balls at the same time, tried to use treats , but yet she will still will not release the ball till she wants to. We stop playing with her when she holds onto the ball and when she drops the ball , we praise her then and throw it. She then will chase it and hold onto it and lay on her bed or under a tree with the ball in her mouth. She loves her balls.

We have a 5mo Mal and 5yo GSD/Husky who like to wrestle 90% of the time they are together. We don’t mind this when outside, but it has to stop when we’re indoors. E-collars are on the way, but should we be doing something else? Lessen the time they spend together? Reinforce positive behavior when they are together when they aren’t wrestling? I’ve physically intervened before but they often get so stimulated by each other that now it’s becoming too difficult to manage that way. Thanks! 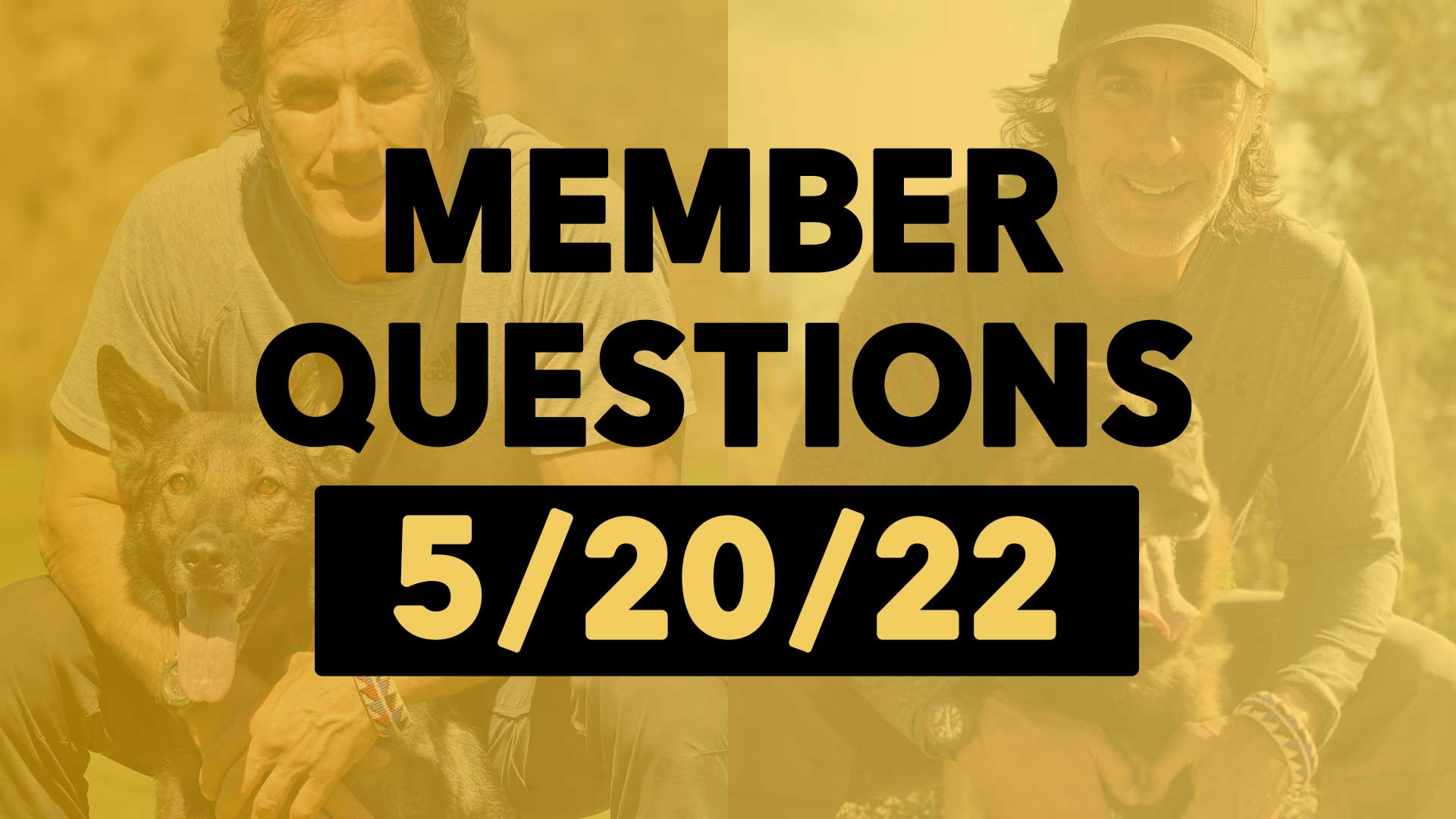